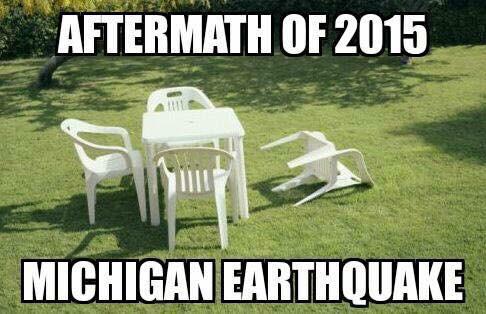 Did you feel your house shake early Saturday afternoon? Turns out you’re not alone. The National Weather Service in Grand Rapids has confirmed that what we felt while sitting and binge-watching Netflix was, in fact. an earthquake.

#Earthquake felt at the NWS office at Grand Rapids 12:23 pm. Receiving numerous calls from the area of the ground shaking. #wmiwx #miwx

The U.S. Geological Society says that a 4.0 magnitude earthquake was recorded just south of Galesburg.

What we felt across West Michigan around 12:25 p.m. Saturday is rather uncommon in Michigan, but it does happen.

West Michigan residents took to Twitter and Facebook to see if it was just an anomalyat their home, or if others had felt it.

And then the jokes started.

I'm pretty pissed I didn't realize what that was until after the fact. Can we have another? #MichiganEarthquake

Best of the Web